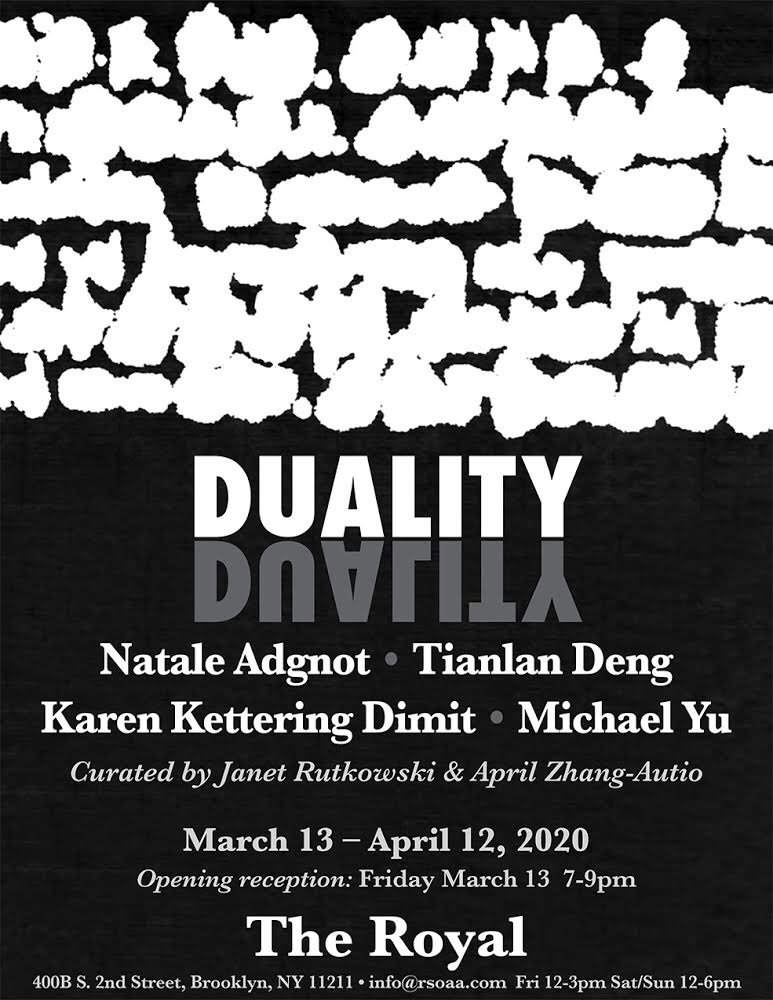 The Royal is pleased to present Duality a group exhibition that features the work of Natale Adgnot, Tianlan Deng, Karen Kettering Dimit, and Michael Yu.

We are already into the first quarter of the new-year 2020. It is a year holds the promise of being auspicious, a time of luck and prosperity. The number 2 is a symbol of partnership and balance, but it can also be the symbol of opposition and conflict. It appears in both Western and Eastern writings of religion, philosophy, as well as the pragmatism of daily life.
Duality is the fundamental concept of this exhibition. The existence of duality is ever-present. One force exists with its counterpart in conflict, or in harmony.

Like the philosophical existence of the yin and yang, the two Chinese male artists in the exhibition are working with their heritage and transforming their work through Western ideals, while the two American women artists are expressing the influences of the Asian mystique.
Tianlan Deng’s “Cave” is an enclosed diorama where he creates what he calls “shadow writing.” This involves a projected video of writing blur characters. The brush stroke letters not only bleed, but also transform from Chinese into English text representing his transition from Eastern to Western academics.

Michael Yu’s “Memory” is a portrait of a woman that exemplifies the beauty of his classical painting style. Now, here in America, his new work has taken on a totally different genre. In his work “Invisible” both the mythical and the cartoon-like merge into a surrealists playground of icons.
Karen Kettering Dimit’s “Yin/Yang, Dance of Death” is her expression of the 20th century’s victimization of women through the world—a powerful statement which utilizing the serenity and fragility of mosaics. Here, the Eastern influence of yin/yang, a well-known symbol of balance has gone awry.

Natale Adgnot’s current series entitled, “Drawings in Three Dimensions” began during her two-month
residency in Japan. Hovering between drawing and sculpture these pieces have a very Zen feel. Her original series “Minerals” were originally developed in the United States using reference to American culture. Now reinterpreted to address a Japanese sensibility.
All four artists in this exhibition are delving into the nature of dualism where seemingly opposite forces may actually be complimentary and interconnected.